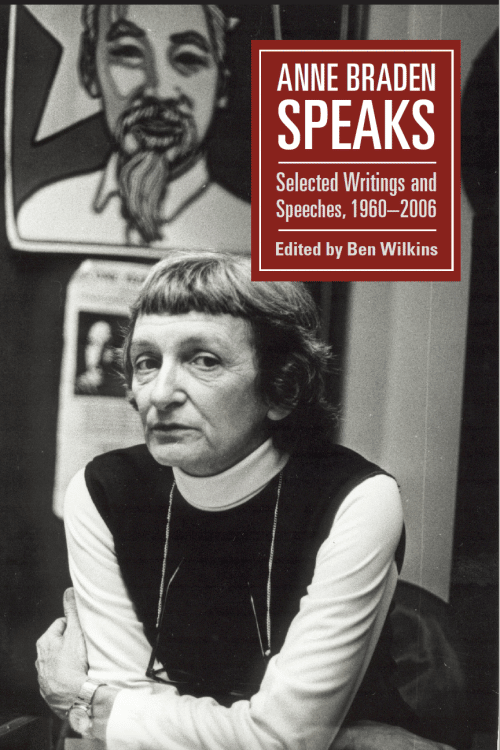 Stay tuned for more details: On July 18th, Ben Wilkins, the editor of Anne Braden Speaks and Director of Raise Up The South will be joined by Rosalyn Pelles of Repairers of the Breach and former Director of the National Rainbow Coalition during the Jesse Jackson campaign, and the renown public intellectual and author of Freedom Dreams.

This unique collection provides a wonderful jolt of insights from a remarkable anti-racist white southern woman who broke the bounds of respectability. Anne Braden braved a lifetime of attacks to write and organize from the trenches and empower the Other America’s search for the ideals of dignity, justice, freedom and equality. “I don’t think any of us can be liberated until we all are,” she wrote, and her words remain fresh, engaging, and instructive in our continuing struggles for a better world.

―Michael K. Honey, author of To the Promised Land: Martin Luther King and the Fight for Economic Justice, and a former southern organizer with Carl and Anne Braden.

The struggle for racial justice in America has always been a struggle for economic justice and for human dignity. Anne Braden understood, as others had before her, that the lie of white supremacy didn’t only hurt Black people. It hurt poor white people, too. And it diminished the promise of democracy for all of us. My brother Ben Wilkins knows this truth in his bones, and he has given us all a great gift by gathering Braden’s insights and wisdom in this volume. Read it as a guidebook for the organizing that’s essential today.

–William J. Barber, II, President of Repairers of the Breach and co-chair of the Poor People’s Campaign: A National Call for Moral Revival

Essential reading on movement building from one of the most committed white anti-racists of the 20th century. Anne Braden’s insights on the chokehold of white supremacy on U.S. culture, laced with her relentlessly humanistic perspective, remain as timely today as they were in her lifetime.

Anne Braden embodied the rich tradition of freedom struggles in the U.S. South, and she was a teacher to countless movement leaders and activists. This illuminating book is required reading for anyone who seeks to understand the movements of the past and the lessons they hold for today.

Anne Braden’s words bring fire to the belly – from her deeply human stories tracing the development of the Southern Freedom Movement, to her repeated invitation to us to join “the other America” – that place of resistance to racism and poverty and war. She is unrelenting in her demand that we confront the evil of white supremacy if we are to have any chance of changing course as a society, away from fascism towards a world where everyone will have a place in the sun. Buy this book, study its many lessons, and organize for that world Anne shows us is possible.

In this much needed collection of writings and speeches by Anne Braden, our present day organizing finds guidance, inspiration and an invaluable faith that change is not only necessary, but possible. Anne is unrelenting in demanding we understand the history of struggle, see that dismantling white supremacy is inseparable from challenging an economic system that benefits the few through the poverty of the many, and oppose the US war machine that ravages the earth’s people. What a gift from Ben Wilkins and Monthly Review Press. What a gift to all who believe in and are taking action for collective liberation.

Chechnya’s leader to send teenage sons to fight in Ukraine

Chechnya’s leader to send teenage sons to fight in Ukraine