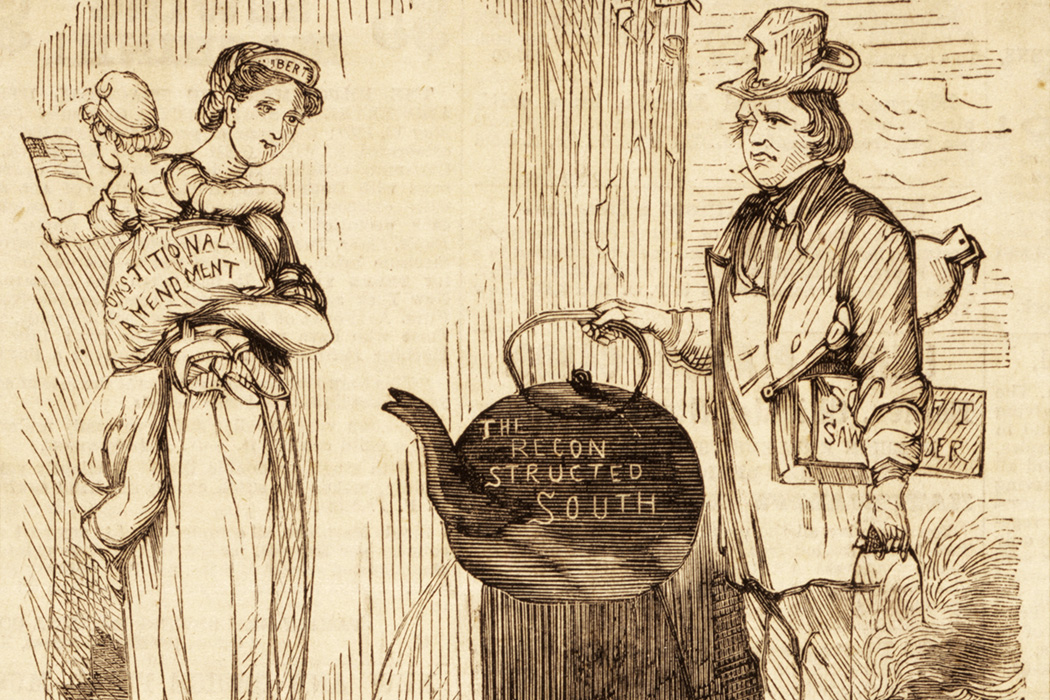 The Supreme Court’s decision overturning Roe v. Wade has drawn into question many rights that previous courts had determined to flow from the Fourteenth Amendment. As legal scholar Garrett Epps wrote in 2004, it’s hard to overstate the significance of that amendment—or the dramatic politics that gave rise to it.

Decisions stemming from the amendment required birthright citizenship and desegregated schools, prevented state governments from censoring or torturing their citizens, and led a host of rulings protecting privacy rights, including Roe. These were radical changes to the government. But, Epps argues, the amendment was radical from the start. It was, in part, a solution to what many politicians at the time deemed an existential threat to the nation: the Slave Power.

“Many Northerners were offended at the idea that one section of the country operated under a different, less free political system.”

Abolitionists invented the term “the Slave Power” in the 1830s, and it became part of mainstream politics in the 1850s. In some cases, it referred to a dodgy conspiracy theory. But it could also reference the political advantages that the US Constitution and the political system of the time conferred on slave states. Anti-slavery politicians argued that, since the nation’s founding, enslavers enjoyed disproportionate political power due to the Three-Fifths Clause and other compromises between slave and free states. This led to a government largely run by enslavers that forced Northern authorities to support slavery through means that included the Fugitive Slave Act of 1850.

And it wasn’t just that pro-slavery Southern politicians dominated the federal government. Slave states also censored anti-slavery publications, with the help of federal mail authorities. And they permitted or encouraged the use of mob violence to silence abolitionists.

“Many Northerners were offended at the idea that one section of the country operated under a different, less free political system,” Epps writes.

Even after the Civil War, people from both North and South suggested that the Slave Power was not done. Black Codes threatened to return slavery in all but name. And, in 1866, the pro-Confederate Richmond Examiner anticipated that—with the voting rights of secessionists restored and Black southerners kept from the ballot—“the political power of the country will pass into the hands of the South, aided, as it will be, by Northern alliances.”

In this light, the 1866 Congress that framed the Fourteenth Amendment was eager to require free speech and free elections in the South and to weaken the political power of the states. With the amendment, Epps writes, the federal government’s treatment of states as largely independent political entities would “be negated or even reversed, with a new preference for national values of equality, participation, and open debate.”

At the time, Epps argues, politicians and politically engaged people saw the amendment, along with other changes made to the government at the time, as a fundamental rethinking of the nation. As historian Herman von Holst wrote in 1876, the North’s victory in the Civil War ensured the restoration of “the Union, but not of the Union reduced to ruins under the constitution of 1789.”